No, this is not a recipe from Wrapped. Here’s what happened….

Yesterday, I decided to post a photo of a jar of peanut butter, a container of cocktail sticks and an opened bag of prunes on my Facebook page. It was accompanied by the following text: ‘Let’s see how well you guys know your world of ingredients. Question in 3 parts: What do you do with these? Who/which people, from where in the world, use(s) them all together? And when? Let’s hear your answers 🙂 ‘ 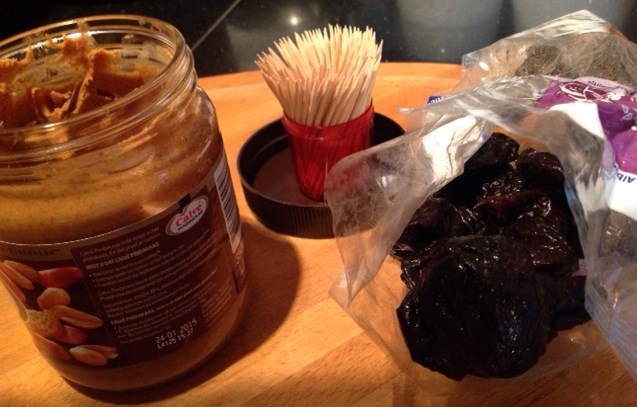 Because there are such lovely people frequenting my page, answers did come in. Some thought that the prunes were dates, perhaps eaten stuffed by vegans? Another admitted to having googled the combination as she couldn’t for the life of her imagine why anyone would want to combine these ingredients. One was utterly confounded by the tiny image on the screen of her phone and didn’t know what to make of it. Some decided to wait and see. One actually got it right! She had seen a Caribbean friend make them. And yet another reader, who knows all about this, commented brightly that they seem to be catching on in other countries. Significantly, countries with large Caribbean immigrant populations.

Earlier that morning, browsing through some Caribbean cookbooks, I smiled involuntarily to see a recipe for ‘Easy prunes with peanut butter’. Yes, an actual recipe. An easy one at that, because it can also be a tricky and rather complicated business. And in case you are about to take that seriously, don’t. Seeing the recipe unleashed a great deal of silliness in me, as it took me straight back to my childhood in Guyana. I felt compelled to share the fun.

I can almost hear you. ‘Fun?’ ‘Prunes with peanut butter?!’ ‘Gosh, that sounds weird!’ Perhaps even a heartfelt ‘Yuck!’ Don’t dismiss it out of hand, though. When I was growing up, prunes stuffed with peanut butter and then impaled on cocktail sticks were considered party fare. Even cocktail party fare. I can’t say that I’ve ever tried them with an alcoholic drink, having been too young at the time, but along with almost everybody else in the Caribbean, I used to love stuffed prunes at any opportunity. Both prunes and peanut butter, and even the cocktail sticks probably, were imported items at a time when shipments were just that: stuff packed in crates and put on a boat that set off for the other side of the world and eventually got there. Back then, imported foods like these were treats for many, not the everyday staples they have now become. And as much as I was amused by the fact that someone would actually put a recipe in a book for prunes stuffed with peanut butter – the easy way – I felt a sense of satisfaction welling up alongside the inevitable nostalgia. Here was a person who apparently thought that it was good enough to share, and was doing so. No snobbery. Not even a hint of self-consciousness. So refreshing in this day and age of gourmet eating, cooking and writing.

Here’s how you do it, my way: remove the seeds from some plump  prunes (or buy seedless ones), stuff the now empty prunes with peanut butter and try to give them legitimacy as a cocktail snack by pricking in a cocktail stick. If you want to get genuine, you can even call the cocktail stick a toothpick. The prune is usually so overstuffed and heavy that it falls off the stick or almost immediately, so you end up having to pick it up with your fingers after all, to convey it to your mouth. There! It is easy,  isn’t it? And as far as I know, this is the only way to do it. I may be wrong, of course, so if you do know a trickier and more complicated way, do tell. And please don’t use Agen prunes. They are far too upmarket and trendy for this simple snack.

4 comments on “Prunes with peanut butter, the easy way”